York Smartphone Guided Tours. These tours have been specially devised to take with you on your visit to the City of York. Simply choose a smartphone tour below and follow the course until you have completed the tour. 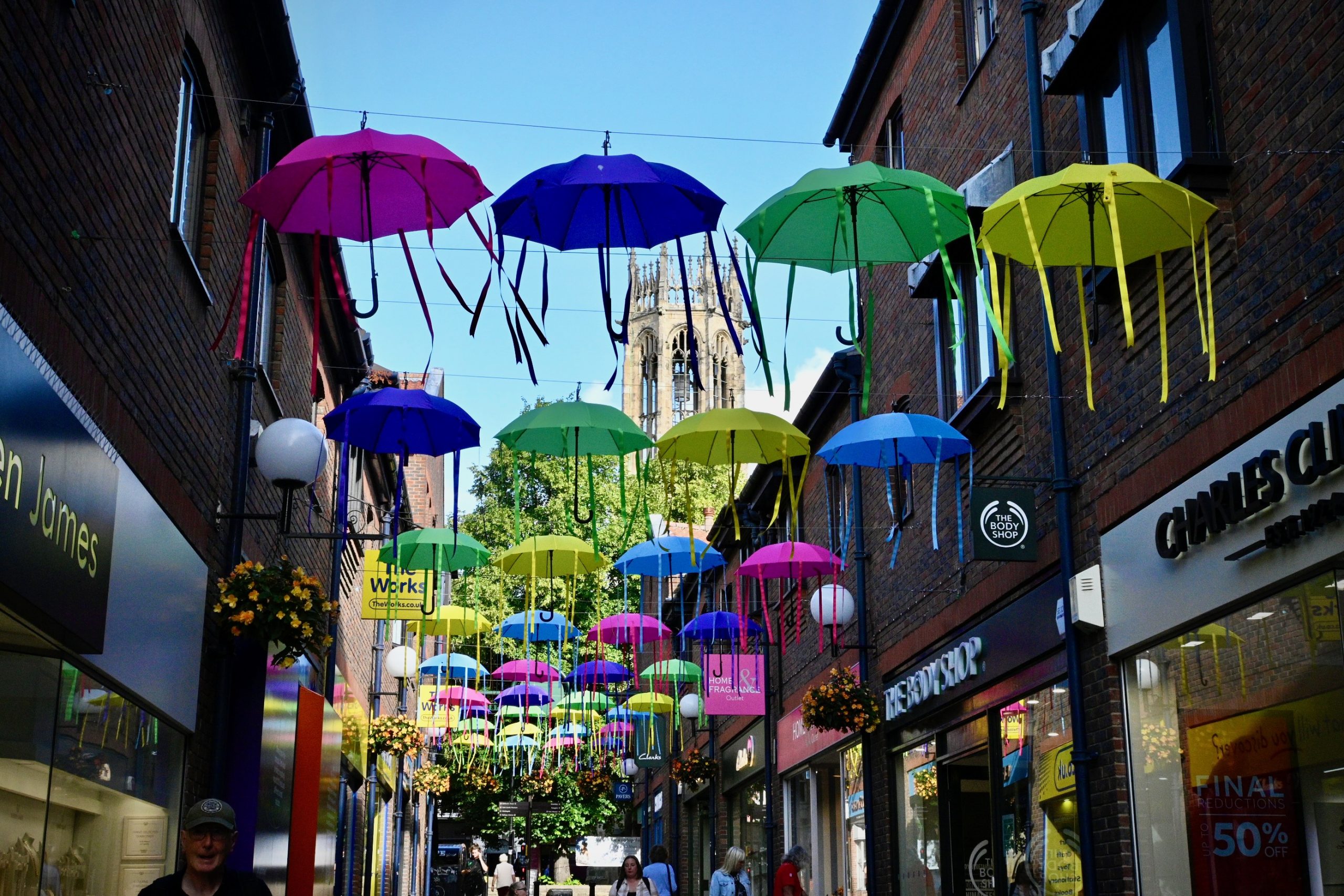 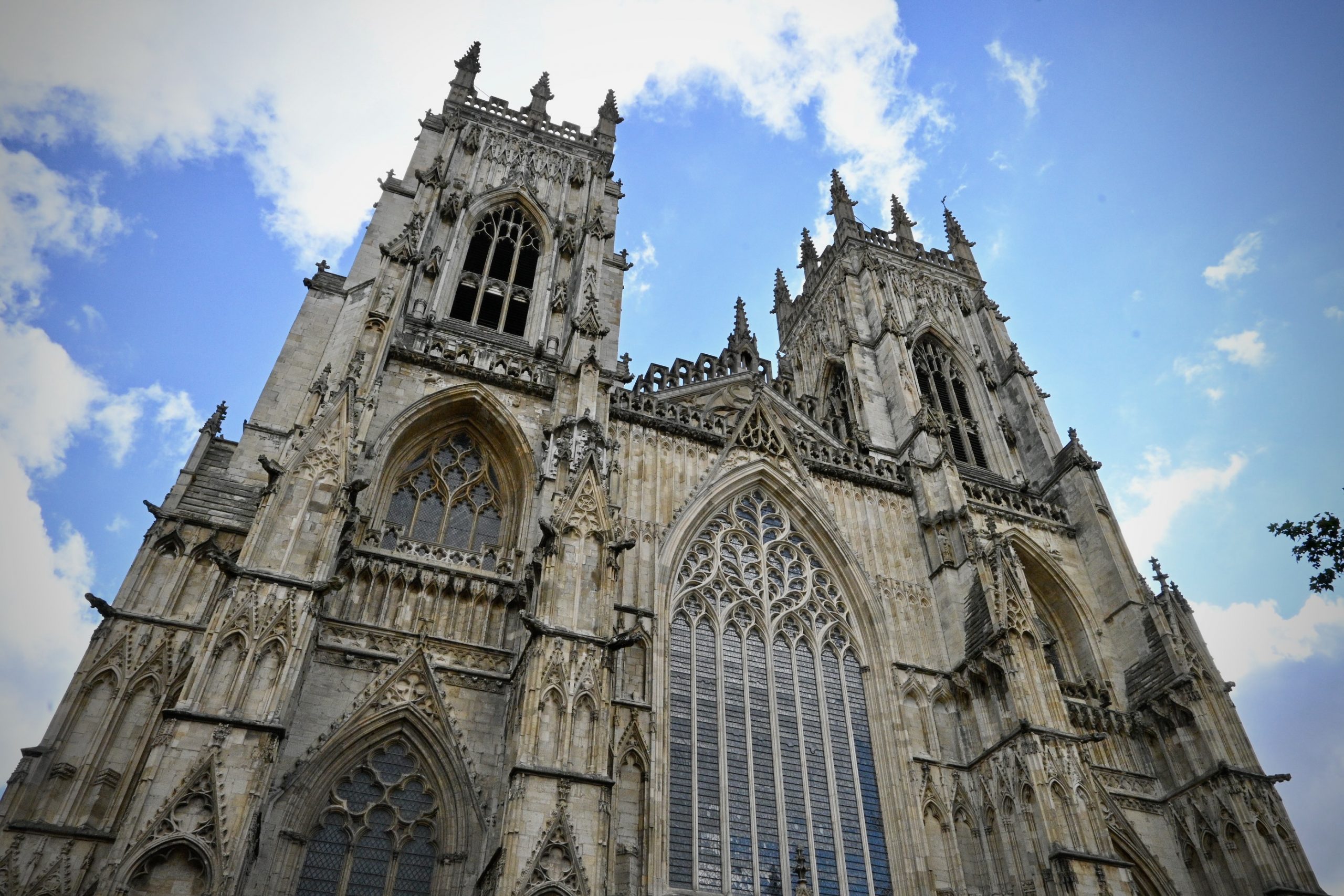 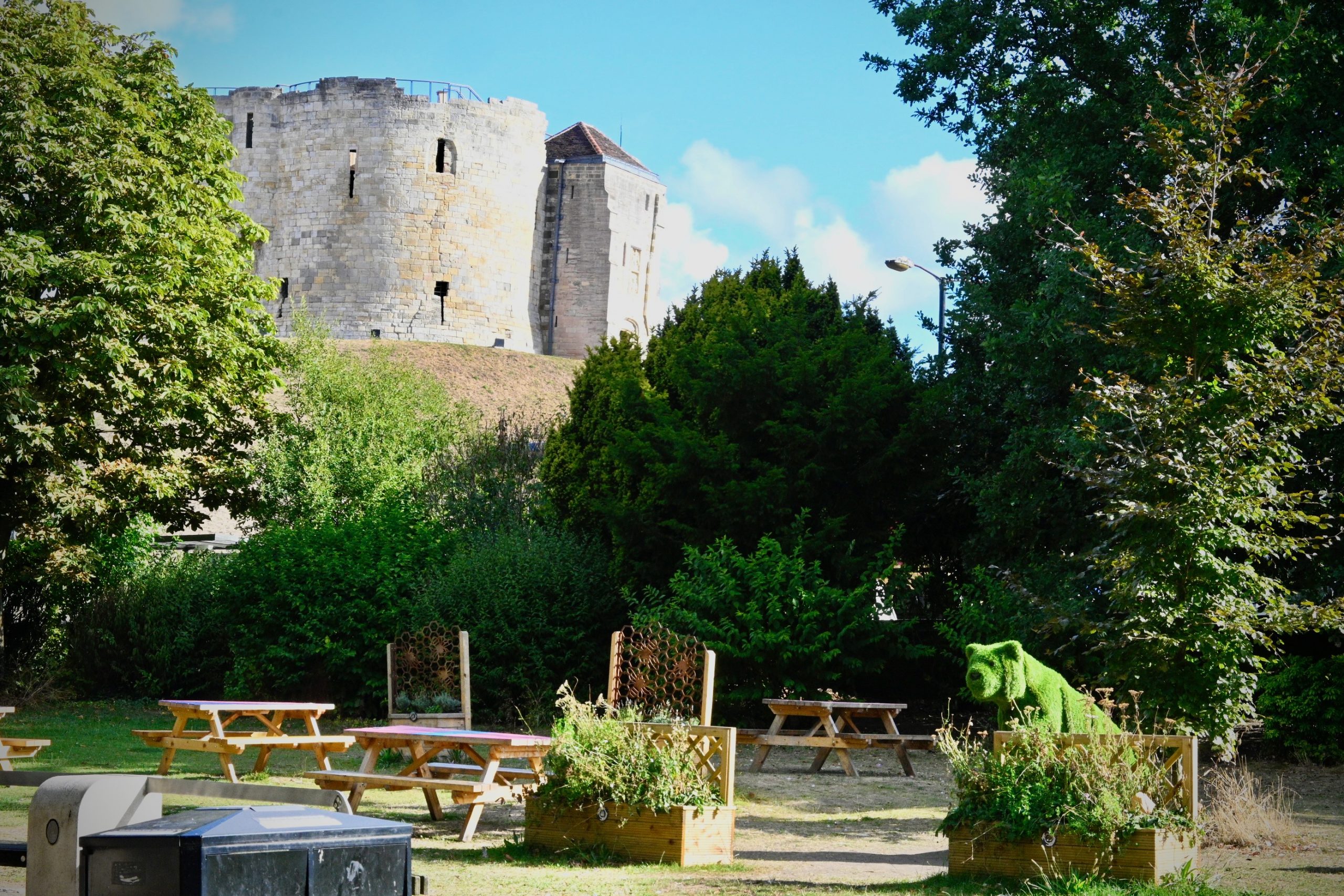 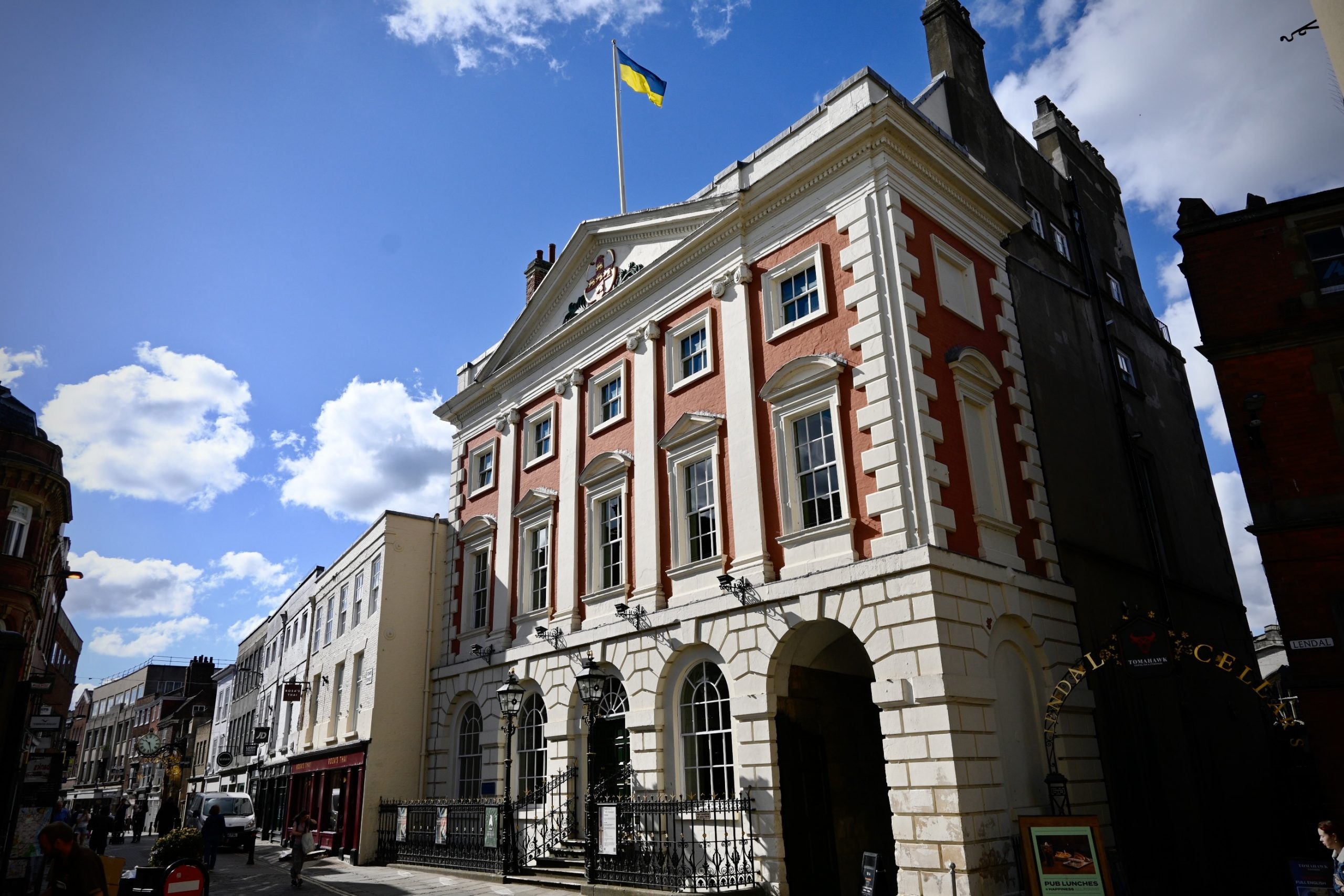 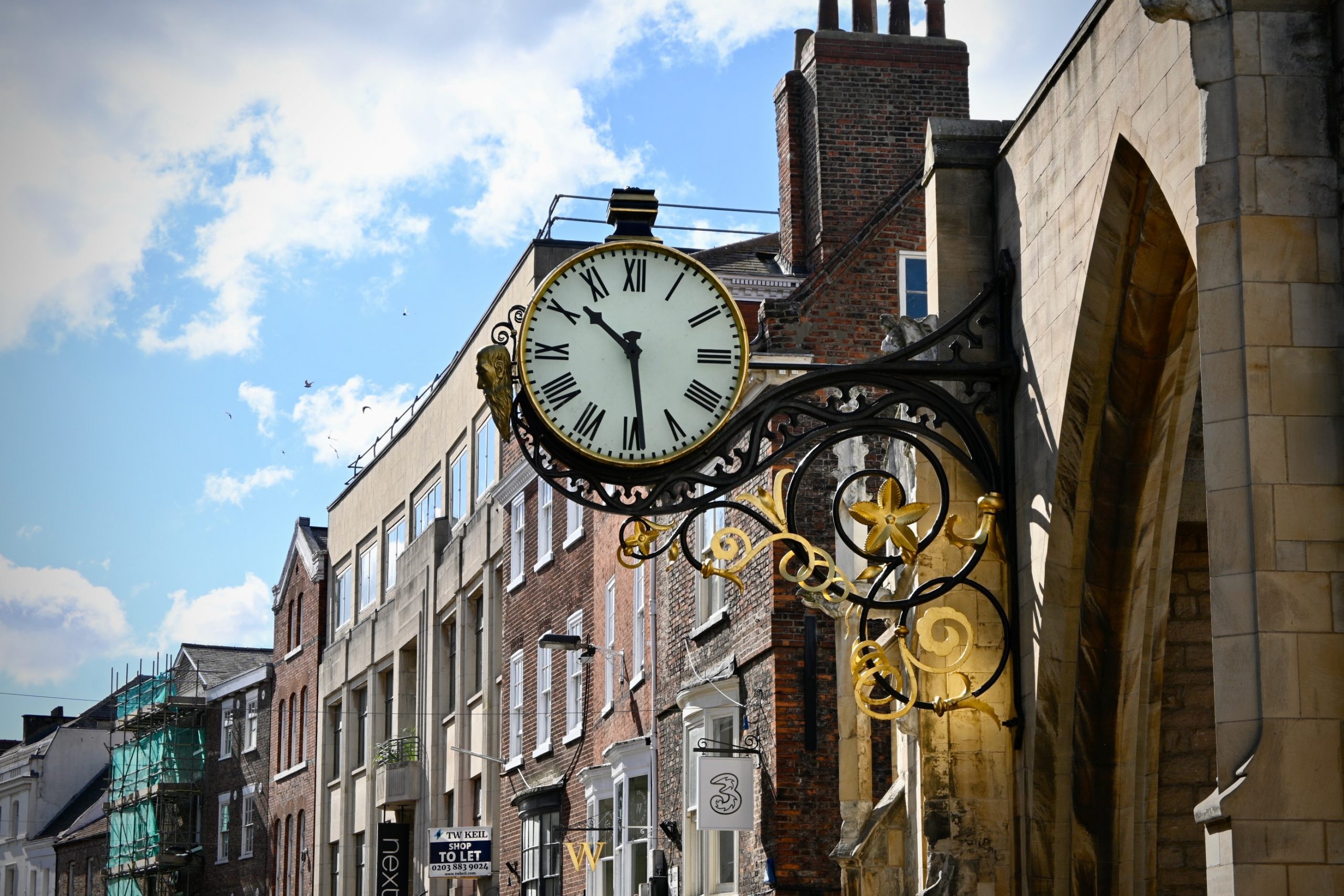 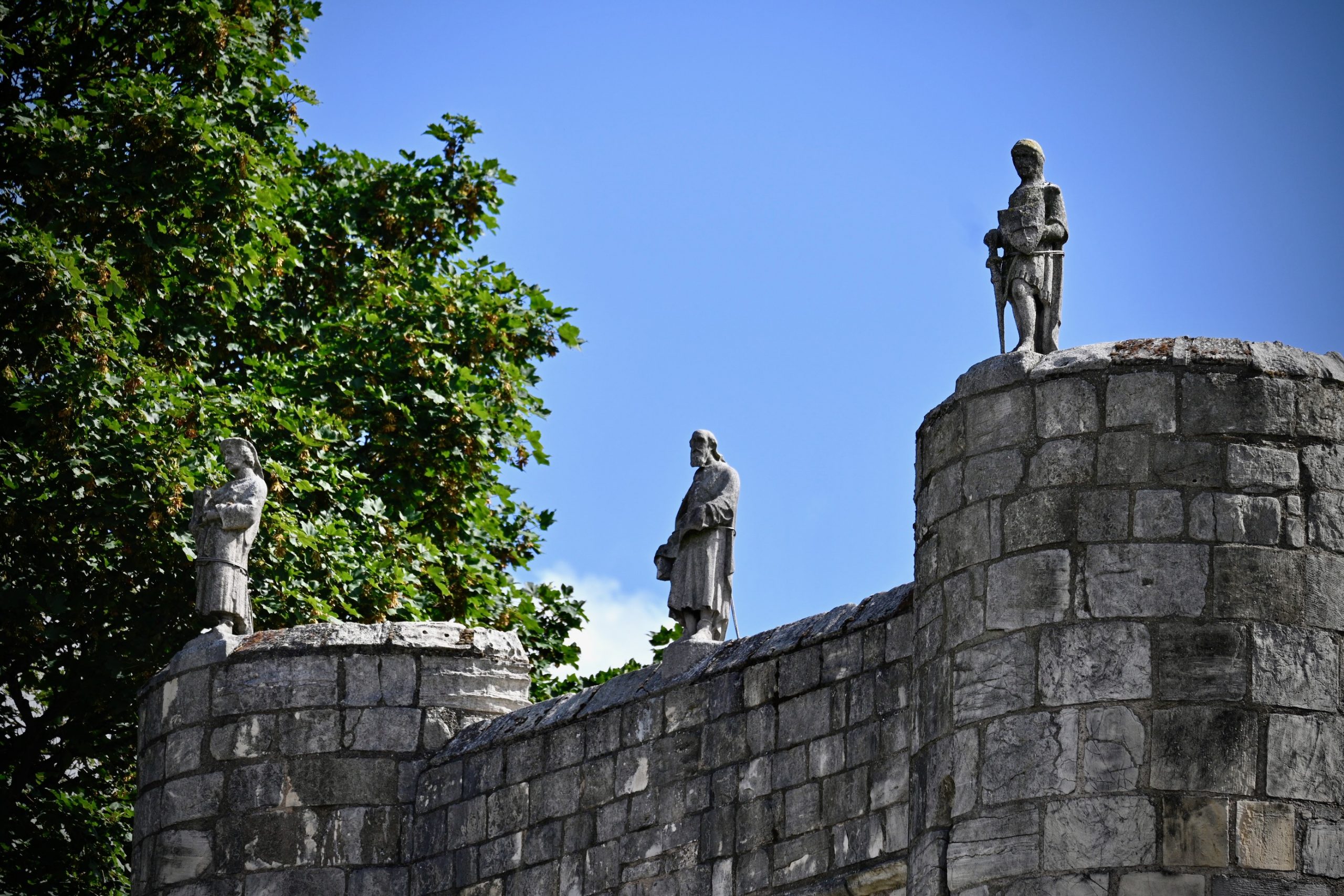 A Brief Introduction to the City of York

York has had a settlement since neolithic times but it was the Roman's in particular who established the City of York. Let's take a brief look at York's History by using the arrows to advance to the next era. The Roman's Established a military fortress (Castra) in York roughy in the York Minster area. They also constructed protective walls that had a different route to the medieval walls we see today. In the Minster area, you will see a Roman Column belonging to the headquarters that was located here. Stonegate was the original road to the headquarters. It was established by the 9th Legion consisting of 5000 men. At this time, York was known as Eboracum/Eburacum. A period that often gets overlooked is when the Angles took over the York area after the Romans departed in 410AD. York later became known as Eoforwic (relating to wild boar). You can see an Anglo Saxon tower set in the wall behind the multangular tower in Museum Gardens today. Former Anglo-Saxon cemeteries have been found in The Mount and Heworth areas of York from the 5th Century. By November 866AD the Danish Vikings invaded York (known as the Great Heathen Army). The Northumbrians made a failed attempt to retake the city a year later. It became known as the Kingdom of Jorvik (pronounced 'Yorvik') where York gets its modern name. In the Coppergate Area, an excavation recovered thousands of Viking artefacts and it is the site of the Jorvik Viking Centre. The Normans Conquest in 1066 was followed by the Harrying of the North in 1069. This was owing to William the Conqueror's response to a regional revolt. Two castles were established made of wood at either side of the River Ouse. One castle that is now known as Clifford's Tower was upgraded in stone. In the 13th and 14th centuries, York became an alternative governing city and consisted of an archbishop. It also became a substantial Jewish community under protection of the Sheriff. York continued to prosper as a city and Water Lanes were constructed, streets that lead to the River Ouse, routes for commerce. Many of the streets such as the famous Shambles became streets retailing freshly slaughtered meats, livestock grazing in the Walmgate area. By 1472, York Minster Cathedral was completed except for the Kings Manor that originally occupied the Abbott for St Mary's Abbey. York also became known for the largest medieval hospital, St Leonard's Hospital that was part of the Minsters extensive grounds. Only the undercroft of the chapel remains today. By the time of the Suppression of the Monasteries in the 1500's the Abbey and Hospital became dissolved but the Kings Manner was spared as Henry VIII admired the building. In 1686 the Bar Convent was established in secret owing to anti-catholic laws. It is the oldest surviving convent in Engand. The Judges Lodging (Lendal) was built in 1726 to house judges when they were involved in quarterly assizes at York Castle. Dick Turpin was convicted in 1739 as a horse thief. His grave can be found in St George's churchyard alias John Palmer. By 1740, the first York County Hospital was established on Monkgate but moving to larger premises five years later. By 1830, the Yorkshire Museum was opened and a year later the first meeting of the British Association for the Advancement of Science was held. The museum was the first purpose built museum in the country. York became a major railway centre owing to the eventually disgraced George Hudson, the so called 'Railway King'. By 1942, the Luftwaffe bombed York targeting the railway station, Rowntree's chocolate factory, St Martin le Grand Church, the Bar Convent, as well as the Guildhall.
In 1961, owing to the Cold War, a bunker was established in the Holgate area and it is now open to the public. An army saluting station was established in 1971 firing guns five times a year. The date marked 1900 years of army in York. In 2000 the River Ouse bursts its banks flooding over 300 homes. There has been a settlement in what we now call York since neolithic times, but it was the Romans who put York on the map when 5000 Romans from the 9th legion established a military fortress and headquarters here. At this time, the area of York was known as Eboracum.

Many assume that the York city walls we see today are of Roman origin, but in fact they are largely medieval. The Romans did establish a protective wall around its fortress but these ran a different route and fell into disrepair.

The Romans arrived in the York area in 71AD but by 866AD the Danes, namely the Vikings, invaded and the area became known as Jorvik (pronounced Yorvik) and its from this York receives its current name today.

The Vikings rebuilt much of the city walls in wood, demolishing many of the existing Roman towers. In medieval times, the walls were upgraded to stone. The Minster didn’t come about until Norman times.

After the medieval period, the Georgian and Victorian periods followed and established two industries that York is famous for, chocolate and the railways.  Terry’s, Rowntree’s and Craven’s became household names and widely known outside of York. The railways since the 1800’s flourished in the industrial revolution.

© Photography and Video by Phill James

Imagery shot with a Nikon Z50

We use cookies on our website to give you the most relevant experience by remembering your preferences and repeat visits. By clicking “Accept All”, you consent to the use of ALL the cookies. However, you may visit "Cookie Settings" to provide a controlled consent.
Cookie SettingsAccept All
Manage consent

This website uses cookies to improve your experience while you navigate through the website. Out of these, the cookies that are categorized as necessary are stored on your browser as they are essential for the working of basic functionalities of the website. We also use third-party cookies that help us analyze and understand how you use this website. These cookies will be stored in your browser only with your consent. You also have the option to opt-out of these cookies. But opting out of some of these cookies may affect your browsing experience.
Necessary Always Enabled
Necessary cookies are absolutely essential for the website to function properly. These cookies ensure basic functionalities and security features of the website, anonymously.
Functional
Functional cookies help to perform certain functionalities like sharing the content of the website on social media platforms, collect feedbacks, and other third-party features.
Performance
Performance cookies are used to understand and analyze the key performance indexes of the website which helps in delivering a better user experience for the visitors.
Analytics
Analytical cookies are used to understand how visitors interact with the website. These cookies help provide information on metrics the number of visitors, bounce rate, traffic source, etc.
Advertisement
Advertisement cookies are used to provide visitors with relevant ads and marketing campaigns. These cookies track visitors across websites and collect information to provide customized ads.
Others
Other uncategorized cookies are those that are being analyzed and have not been classified into a category as yet.
SAVE & ACCEPT